How to see Disneyland Paris in one day 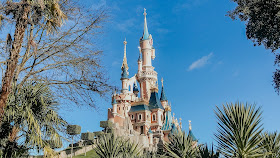 This is an advertisement feature in collaboration with Klook.

If only 6-year-old Melis could see me in 2020... I finally made it to Disneyland for the first time! I recently visited Paris for a romantic few days away with my other half as his Christmas present from me. Whilst a trip to Disney might not sound romantic to some people, he absolutely loves theme parks and I knew it would be an ideal part of his treat weekend away.

When Klook got in touch to ask if we'd like to work with them on a day trip to Disney I found myself almost jumping up and down with joy in my office! It would round off our trip perfectly and finally I could see this magical place with my very own eyes.

We booked our tickets using Klook's handy app which I have used a few times now and find very quick and easy to use. As a real bargain hunter, something I love about Klook is the certainty you have that you are getting a great price. If you find a cheaper ticket for the activity you have booked, they will refund double the difference. For most activities you can show a mobile voucher which is easily accessed through the app. It's just very easy and convenient to have everything in one place rather than having to book through various companies.

We had one day tickets for both Disneyland and Walt Disney Studios which we knew would be quite a bit to fit into one day but we were determined to see as much as possible during our short break to Paris. Let's be honest, it wouldn't be one of my weekend trips away without packing in absolutely everything! 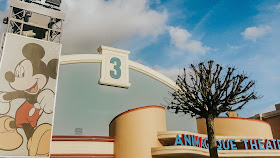 Getting to Disneyland from central Paris

It was so easy to get to Disneyland Paris from the centre of the city. It could probably be done as a day trip whilst staying in central Paris but it would be a long day if you wanted to get to the park for opening and stay to see the closing fireworks.

I booked us an Air B'n'B (paid for ourselves) near Val D'Europe station which is one RER stop away from Disney and very convenient. I'd recommend doing something similar to save on Disneyland hotel prices if you just want to go for one day.

We got the RER from Paris centre which takes 40 minutes. We arrived early, hoping to get breakfast in Disney village, but found that most of the food outlets didn't actually open until 10.00am which was when the park itself opened at the time of year we visited. Always check opening times for the dates you intend to visit as it is different throughout the year.

We ended up in Starbucks which was nice but not what we had planned - something to note if you plan to get there early and maximise your time. I would love to try Annette's Diner if I had more time in future, the menu looked amazing.

We decided to work our way round the main Disney park before lunch, Walt Disney Studios in the afternoon and then back to Disney for the closing fireworks. 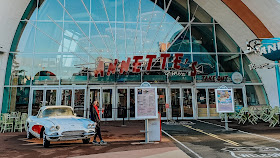 As soon as we arrived we were greeted with views of the beautiful Disneyland Hotel (I am determined to stay there one day!) and just loved how it looked in the bright blue sunshine.

The weather was bright and sunny for the whole time we were at Disneyland Paris and it made our day. Everything looked so gorgeous in the sunshine. We were very lucky to get this weather in February but I would highly recommend visiting in spring / summer if you can as I can imagine it isn't very fun dashing between rides on a cold and wet day. 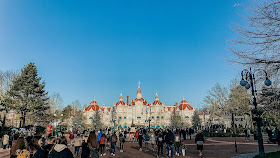 We headed into the main park first and dashed straight for the Phantom Manor ride which we got on with only a five minute queue. I'd recommend doing a ride you really want to go on as your first priority as this will undoubtedly help you to avoid longer waiting times later in the day. As you can see below, the blossom was just starting to flower on some of the trees so it really did feel like spring! 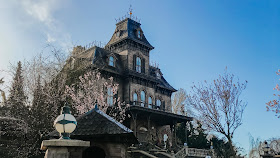 As it was half term when we visited, queues were fairly long so we didn't go on all the rides. This suited me just fine as I am not a massive thrill-seeker and much prefer interesting rides with things to look at, rather than big roller coasters! Fast passes are a great way to maximise your time as you get a specific time to return to a ride and get to go in a much shorter queue, the Disney site has all the information you need about how the fast pass system works.

My absolute favourites were the Pirates of the Caribbean and the iconic 'It's a Small World' ride. We managed to watch the Frozen parade, find the hidden dragon under the castle, and just like that the morning was over.

We decided to have lunch at Au Chalet de la Marionnette, (paid for ourselves). This was such a highlight of our day!  I expected quick service food to be a bit basic if I'm honest, but the hot dogs had such a nice flavour, with a lovely soft bun and piping hot, crispy fries. I was very impressed and would recommend this restaurant, especially as it is a very quick option when you are trying to see Disneyland Paris in a day. 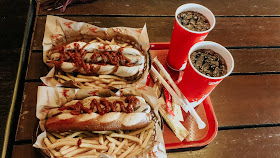 After lunch, we headed straight to Walt Disney Studios which was also included in our day tickets which we booked through Klook. It was really quick and easy to gain entry to the other park. I loved walking through Walt Disney Studios and taking in all the themed restaurants and shops.

The sun continued to shine throughout the afternoon and I thought the park looked completely gorgeous bathed in golden light! I couldn't stop snapping away and taking in all the different rides. 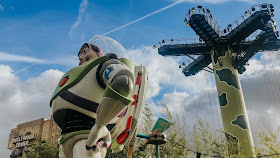 As part of our time in Walt Disney Studios, we went to the Frozen show which was happening as part of Disney's current theme, which regularly changes. I wasn't sure what to expect but it was really good fun, I had to stop myself singing along to Let It Go, of course! 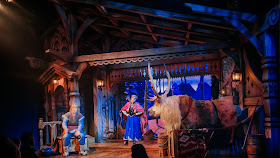 My favourite ride in this park was Ratatouille and I would definitely recommend it for kids and big kids alike. As we didn't have much time left and queues were starting to build, we decided to go in the 'single rider' queue and just sit separately on the ride. This works well if you don't mind sitting with random groups to save a long time queuing.

After a few rides it was time for a bit of retail therapy and a coffee. I could have gone mad in the shops but the fact we only had a rucksack each as hand luggage managed to stop me buying too much.

The shops were better around Disneyland Main Street (pictured below), so with hindsight I'd advise planning to do most of your shopping in that park. I did feel that with one day it was tricky to fit in shopping as well as rides so it's good to plan time for that well-deserved retail therapy! 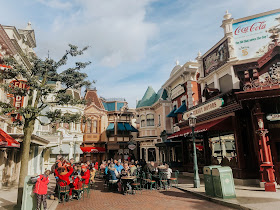 Whilst we were in Walt Disney Studios we had dinner at the Ratatouille themed restaurant called Bistrot Chez Rémy which we paid for ourselves. We had booked this in advance and heard people being turned away on the day, so I would recommend making a reservation for your evening meal if you only have a day and there's a certain restaurant you want to eat at.

I didn't love the restaurant and after being spoilt in central Paris (check out my review of the best unlimited steak frites restaurant ever) the food just wasn't up there. It was fine, and my meal was swapped when I told the waiter, but I wouldn't rush back to this particular restaurant. It was the only part of the day which wasn't totally perfect! 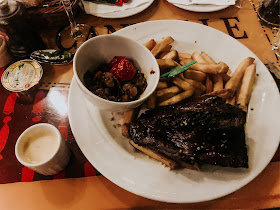 Back to Disneyland for Fireworks

Time was ticking on by this point so we decided to head back to the main Disney park so I could look at a few more shops before the closing fireworks display. I didn't really know what to expect from the display at all. There was so much more to it than just fireworks and I think I even had a little cry at one point!

I'm not sure how I've managed to live under some kind of rock and miss how good this display actually is, but it was the highlight of our visit and such a memorable end to our day in Disneyland Paris. 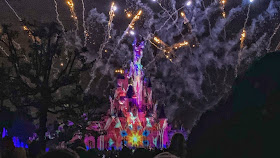 Thank you Klook for making a childhood dream come true, and all I can say is that I cannot wait to take my own children to this special place some day. If you are wondering if you can see Disneyland Paris in a day, and if it's worth it without kids, then I would wholeheartedly say that it is. As soon as you enter the park it's like going back to your childhood and completely switching off. Who doesn't need a bit of that magic once in a while?

If you are planning a visit to Paris then make sure you read about my visit to the Eiffel Tower with Klook as this is another unmissable activity for your trip! 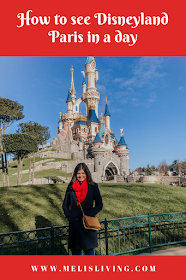